The publisher of the Thoroughbred Daily News (TDN), Sue Finley, has been a friend of mine for over three decades. When we began talking about her desire to add video content to their existing daily newspaper, monthly lifestyles magazine and podcast, we weren’t thinking of working together on it. Our strategic talks were about her building something consistent and affordable while maintaining the TDN’s high standards for their professional, horse-savvy audience.

It happened that we (PWMG) were out producing features for NYRA (New York Racing Association), and we offered to shoot some quick soundbites for the TDN. Sue became more and more interested in what we were doing for NYRA, where she had held her first job in the industry 30 years earlier, and began giving us our best feature ideas and support. And we were having fun. We decided then that we should work together to flesh out the TDN video model.

We agreed that the best plan would be to involve the TDN writers who are already covering the stories on the grounds at sales and major races. The TDN audience knows and trusts the writers. So, we started shooting interviews and features with writers conducting the interviews and assisting in the formatting of the pieces.

The first roll out of videos were well received but it soon became clear that we could not keep up with consistency needed for a good build out without spreading out. With my crew stationed here in Florida, we could only cover so much without exhausting the budget Sue was targeting.

We started distributing cameras to Sue’s staff. First up was Alayna Cullen in Ireland. Alayna filed stories immediately. She was slightly apprehensive about her video skills at first, but determination was on her side. Alayna now files beautifully shot interviews, b-roll and stand-up reports. She has developed several video series already and TDN Europe will never be the same.

Kelsey Riley, in Lexington, took to the camera almost immediately as well. Kelsey rode the Mongol Derby last August (620 miles across Mongolia on a horse). She was not going to let a camera, a mic or a gimbal scare her.

Lucas Marquart, a popular thoroughbred writer and experienced shooter, was a natural.

Christie DeBernardis was also an early joiner and, in conjunction with PWMG, earned herself an Eclipse Award for her feature on Zenyatta’s first foal, Cozmic One. This was a big moment for the TDN as the Eclipse Award is the most prestigious in Thoroughbred racing.

We now have a team of writers working on both written and video stories. They shoot and upload their footage to cloud folders, where we retrieve them. Together with the writer, we format the feature and then edit it for publication. Anthony LaRocca heads our team in video production and asset library storage. I suspect his brain operates like AI (my nickname for him along with Ant Farm) because the amount of new material he can process is uncanny. If you need a specific horse clip, Anthony can find it before you begin to count seconds.

The produced features appear on the TDN website homepage, within the PDF paper and on all social media channels. We have seen consistent growth for the videos as well as for the homepage itself. I’ll let Sue tackle the numbers in Sue’s box below:

“A year ago, we were happy if our videos hit 1,000 views. Now we’re not happy if they don’t hit 1,000 views in the first hour. We’re at the point when people are checking and rechecking out site to see if a new video has been posted, and devouring the ones we do. This month we have shown 227,000 video streams, putting us on a pace to hit 2.5 million per year. That’s up from zero a year ago. Patty’s game plan for us was a winner, and it was as simple as: content is king. Each video we now post gets tens of thousands of views on our site, and tens of thousands more across our social media platforms. And because Patty has taught us to shoot, she has made it affordable for us.” – Sue Finley, Thoroughbred Daily News

We are now producing an average of four videos a week for the TDN and continue to grow that number. The TDN team is growing in numbers and production skills as well.

We were helped in planning our video processes by a friend of mine at ABC News who has to file stories rapidly with deadlines looming.

Years back when Sue and I worked at ABC Sports we had to churn out multiple pieces and sometimes worked multiple shows in a week. So, we are a company today that works on quality in conjunction with efficiency and productivity.

After the video content was established, several of Sue’s advertisers inquired about doing features on horses that would be coming up in future sales. Sue conceptualized doing sponsored advertorials to inform her readership as well as help her sponsors drive sales.

It is Content Marketing 101 taken to a new level. 201? These are fleshed out stories. Comprehensive. Informative. And journalistically sound. They are marked as sponsored by the advertisers but produced by us and the TDN writing staff. For people looking to spend millions of dollars buying horses, the more information the better.

As well have rolled out the advertorials we have been astonished by the numbers. In every case, the advertorials beat out the straight commercial ads by multiples of view numbers. The potential buyers appreciate the added information and the sellers enjoy the spread we are seeing with these videos.

Sue can explain how far and wide they travel and how they have been received in the Thoroughbred marketplace.

Thoroughbred racing is an international sport, and our videos are routinely watched in almost every country around the world. We run an American site and a European one, and we have started cross-posting the videos because we find that no matter where people live, and no matter the nationality of the subject, people are hungry for content, as long as the story telling is top quality. That’s what PWMG allows us to do: top-quality story telling with top-quality production value at a reasonable price. – Sue Finley, Thoroughbred Daily News

Working with the TDN on this project has been exceptionally gratifying. Growing something out of a solid journalistic foundation is the best of all circumstances. We started with the notion that it is far easier for a writer to become a producer than the other way around. Story telling lies at the base of all forms of journalism and now we are learning that it is the most effective marketing tool as well.

We are forever grateful to our partners at TDN. Content media is a team sport, and we love our team.

I love telling stories. It’s what I’ve always done. This is one of the reasons I love today’s media and marketing space. Every company or person has not only a level playing field – via the web – to tell their story but also the necessity. Fortune 500 companies continue to shift budgetary funds out of traditional advertising channels and into dynamic content marketing.

Content is king. Whether you are B to B, B to C, a news or media company, or an influencer, your clients, viewers, and audience expect rich informative content. And they expect it on a consistent basis.

People rarely watch a video twice, so commercials aren’t seeing the reach on the web that they enjoyed in the golden days of television.

No longer do we see the push out of ad campaigns that remain static. We would no longer stay interested in a photo of Mark Wahlberg in his underwear past a few hours. Imagine that. Content must be dynamic. It must change. It must engage. It must inform. And, then it must retain.

When I am working with companies on their content strategies, I ask these questions:

• What are you trying to say with your content?
• Are you saying it?
• Is your audience listening?
• Are you engaging? Informing? Retaining? 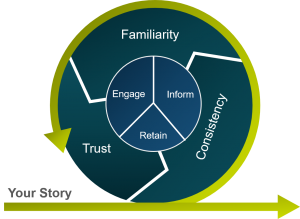 Wrapped around all of this is your story. You can never forget you are telling your own story to your clients or viewers with every piece of content you publish. Through this you engender engagement and trust with your audience.

This simple diagram is something that spins in my head. We work from the center out, but your story is the blanket that quietly wraps around it all.

Our sweet spot at PWMG is video content. There has never been a time where video is more in demand. Video engages at higher rates than any other content. Remember to mind your video budget to stretch your quantity. Be mindful of consistency. Your content is your conversation with your audience. Keep it going.